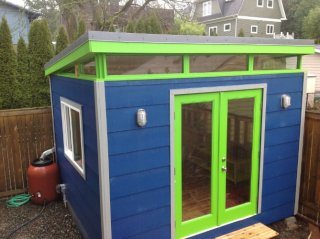 Modern-Shed SEATTLE — When Joe and Lisa Sakay moved into their new home in the Leschi neighborhood of Seattle this past June, they both felt as though the home was missing something.

“For some reason, the house didn’t have a basement or an office, a space where I could go and work and watch football,” said Joe Sakay, an attorney who puts in many hours over the weekend. “I needed my own office space to get my work done.”

In addition to work, however, Sakay has been a “huge” Seahawks fan his whole life.

“I remember when I was 7 years old, hearing on the radio that they had named the first football team in Seattle,” Sakay said. “At our new house, we didn’t have a man room, so we decided we needed to figure out a way to find me some space to do that.”

The Sakays, who have three young children, thought about adding onto their home or building a basement, but both endeavors seemed too costly and overwhelming so soon after their move.

That’s when they remembered a Modern-Shed demonstration they’d seen at a school auction.

Construction on their Modern-Shed started in December, and finished right around Christmas.

The 10’ by 12’ shed fits cozily in the Sakay’s backyard, with French doors that open out onto the back patio of the house.

Sakay chose to outfit the interior with bamboo flooring and a wood finish, but of course the most striking feature of the shed is its coloring.

Unfortunately, he hasn’t yet been able to watch a game in the shed, where he mounted a 47-inch flat-screen TV.

“Ironically, the shed right now is used by my kids every single day,” he said. “It’s become more of a kid’s playroom than a man room. We will have to negotiate that.”