Guest Cottage: Convenience in a Box 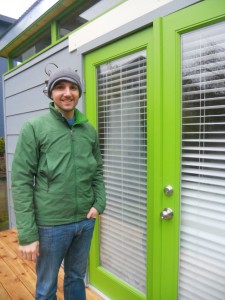 SEATTLE — When Kai Carroll and his wife, Emily Wang, were expecting their second child last year, they knew that they had to create more space in their cozy three-bedroom house in Ballard.

The couple loved their house, and they loved their neighborhood. But with a young son and a daughter on the way, they realized that each child would need their own room — so there would soon be no space for either set of grandparents when they came to visit the little ones.

What’s more, their home only has one-and-a-half bathrooms, meaning shower schedules became de rigueur whenever they had visitors.

“We really wanted the convenience of another shower,” Kai recalled. “We looked at expanding the upstairs with a guest room and bathroom. That was going to be much more expensive.”

“The other companies weren’t local, and I actually had poor service from them,” Kai said. “It was hard to get a hold of people. I was super happy with Modern-Shed.”

The couple installed a 12-by-14-foot guest cottage with a full bathroom in their backyard. Kai’s father and brother completed construction at the end of September.

Both Kai and Emily’s parents live in Oregon, and they’ve all come over numerous times.

“It’s a perfect shed,” said John Carroll, Kai’s father, after a recent stay in the cottage. “It’s nickname is the love shack.”

Meanwhile, Kai’s mother, Barbara Carroll, adds that the shed allows visitors the option of sleeping in.

The holidays were busy with visitors, including friends from overseas, Kai said.

“We had some friends visit, and they had a little girl, and it was perfect for them,” he said. “Sometimes just my dad will visit or just my mom. It’s definitely had its use.”

The convenience of the shed surpassed the couple’s expectations.

“Everyone really likes it,” Kai said. “It’s comfortable. It’s quiet. Everybody sleeps in. It’s been very positive. Now, (guests) have their own space. If they’re tired, they can go in and lie down without dealing with other noise in the house.”

As the weather warms, Kai has plans for other uses for the shed — maybe as a crafts room for the kids, or as a man cave for himself.

Still, the Guest Cottage is an ideal place for guests.

“It’s perfect for what we were getting it for,” he said. “It fits in with our life at the moment.”