David Vs Goliath Battle to live in Toronto Tiny House

It really is time for all “City Halls” Across North America to consider #Tinyhouse living. Especially when the average #Vancouver house is $1M+

Here is a story on the Toronto Star about a Man fighting City Hall to allow Tiny House Living.

A Toronto man is trying to get the city to embrace his pint-sized housing plan. 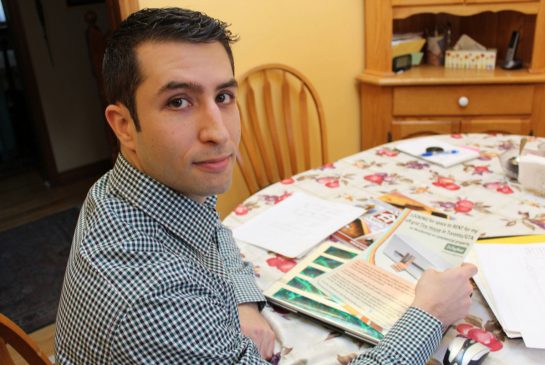 The proposed home will be cubelike, trailer-sized and wheeled — although not for the purpose of driving — and completely self-sustainable.

The problem? On paper, it sounds exactly like a standard travel trailer, and city zoning is clear: You can’t live out of a vehicle.

In reality, Anthony Moscar says his home will be anything but.

“Trailers are these temporary places . . . there’s no sense of having to be concerned about anything for the long term, because eventually you’re going to reconnect to a power source,” he says. “The tiny house isn’t any of that.”

Moscar’s home will be 11 metres long and between 2.5 and 3.7 metres wide. It will operate using rainwater and solar panels and will even feature a composting toilet. He’s been considering the idea for almost a year, and this spring, he intends to make the self-sustainable home a reality.

The 29-year-old naturopath and his supporters, who include one of the tiny-home movement’s Canadian experts, regard his home as the next frontier in living small. They also expect it to be a viable alternative for today’s youth as housing prices soar. (Moscar expects his home to cost around $30,000 to build.)

But first, they have to see if they can change the city’s mind.

A spokesperson for the city’s planning department declined to discuss ways in which Moscar might get approval to live in his house, or who he might speak with about it, saying only ‘there are no exemptions.”